This is for all of you avid history buffs!

I wish to give credit and acknowledgements for this page to the Ardmore Public Library
and associated contents therein. 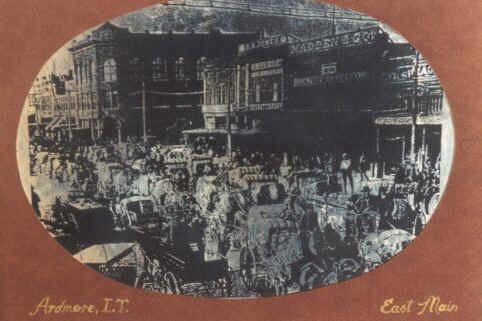 A dramatic change began in the mid 1880s in what was to become the Ardmore area of Pickens County Chickasaw Nation, Indian Territory. This change was brought on by the coming of the railroad. In 1885-1887, the Santa Fe built north from Gainesville, Texas across the Indian country, establishing towns and opening up the vast area to settlement by white people. When the Santa Fe Railroad laid track into the Chickasaw Nation the railroad crew set up a camp exactly 100 miles from both Fort Worth and Oklahoma Station (now Oklahoma City) and a tent city began.

The stop, Ardmore, was named for a town in Pennsylvania as were several towns along the line. The name Ardmore originally came from Ireland which means 'high place'. When the railroad crew arrived the only structure was the old 700 Ranch House, built in the early 1880s. In 1883, U.S. Post offices were established at Healdton and Berwyn, and in 1885 at Lone Grove.

Ardmore got off to a fast start as an area marketing and trade center. The town's birthday was set on July 28, 1887, when the first regular train arrived from Gainesville. The Post Office was estabilshed on October 27, 1887. New residents for the town and settlers for the surrounding area flocked in, eager for the opportunities offered by the virgin country. There was no 'land run' or other date of official opening, the settlers simply moved in. The land was owned by the Chickasaw Indians, and was leased to the white settlers who paid an annual fee for a permit to be in the area.

Ardmore grew rapidly, and in the early 1890s was the largest town in all of Indian Territory, with several thousand residents. But there was no city government because of no legal basis. A branch of Federal Court was established in Ardmore in 1890 and this was the government for the white people. U.S. Marshalls and Deputy Marshalls enforced the laws. Ardmore continued to grow during the early 1890s, and farmers in the area produced bumper crops of cotton, corn, oats, cattle, hogs, fruits, and vegetables from the fertile soil.

Ardmore was the principal marketing center for all of what was to become Southern Oklahoma. On October 28, 1893, the Daily Ardmorite newspaper was established, destined to serve the city and area into the long future. Since Ardmore had no city government, there was no police department, no fire department nor other city services. The only water supply was from wells and cisterns, inadequate for fighting major fires, and this led to Ardmore's first great disaster of its early years. On April 19, 1895, in the early morning hours, fire broke out in a livery stable on North Caddo Street and within a few hours swept through the main part of of town, destroying 82 business buildings and residences. The young city was practially wiped out, but the citizens went to work to build back and within a few months Ardmore was in operation again. After the destructive fire, the citizens organized a volunteer fire department and purchased a horse-drawn steam pumper fire engine.

The Ardmore Board of Trade, which was the first civic organization and later became the Chamber of Commerce, raised money to hire a night watchman because of many burglaries. In mid-1898, Ardmore took two big steps toward becoming a modern city-- a municipal electric generating plant began operations, and the first telephone service was provided! And late in 1898, due to a new law, Ardmore was officially chartered as a city under authority of the federal court. The first city officials were elected in 1899, and the first city departments were set up and taxes levied. Another important part of the new city charter authorized the establishing of a city public school system and this was begun in 1899 with four ward schools. Rapid progress was made in providing adequate facilities and full-scale elementary and secondary education for the city children.

In the meantime, the Dawes Commission was enrolling the Chickasaw and Choctaw Indians and making individual allotments of the tribal lands. Thus, for the first time, the white people could purchase and own the land on which they had built their homes and businesses. Progress was rapid during the early 1900s. Two new railroads came into Ardmore from the east, the Rock Island and the Frisco, and more people came to settle. The new city goverment was working hard on providing utilities, with the support of the citizens.

As a farm and ranch marketing center, Ardmore became known as the greatest inland cotton market in the world. When in 1907, the Indian Territory and Oklahoma Territory were joined in the new 46th State of Oklahoma, counties were laid out and Ardmore was made the county seat of the new Carter County.

In 1913, two big events brought more progress and prosperity to Ardmore and the surrounding area. On August 4th of that year, the first spike was driven to begin construction of the Ringling Railroad west from the city to open up western parts of the area. On the same day, the discovery oil well was completed in the fabulous Healdton Oilfield. The oil boom years had begun, and four Ardmore men were the pioneers; oil brought riches to Ardmore, evidenced in fine churches, schools and other public facilities but it also brought the city's second great tragedy.

On September 27, 1915, some tank cars of natural gasoline exploded in the railroad yards downtown at 1:30 in the afternoon. In an instant, much of the downtown area was wrecked, 42 people were killed and hundreds were injured. Again, Ardmore rebuilt their town, as they did after the fire in 1895. Within a short time, most of the damage was repaired and the pioneers resumed their busy lives and careers. The oilfields spread across western Carter County and into adjacent counties, and bountiful oil production from the area was credited with helping in World War I for the U.S. and allies. Ardmore was the center for the area oil business. The city population approximately doubled from 1910 to 1920, due to the oil boom and an increasing number of manufacturing plants.

Ardmore has grown from this structure to a modern industrial city in less than a century---that is Ardmore's record of progress. The traditional double cabin with open "dog-trot" (part of the old '700 Ranch House') is now restored and serves as a pioneer museum in Fair Park. Oil men who have made their money in the region have proceeded to pour it back into notable cultural and economic projects. These include the Charles B. Goddard Cultural Center in downtown Ardmore and the Samuel Robert Noble Foundation on US 70 East.

And this my friend, is the history of our beloved community known as Southern Oklahoma.